American Indians of the

Hundred of years ago, American Indians, also called Native Americans, were the only people living in North America.  Thousands of American  Indians lived in the forests of the eastern woodlands. Tall trees and clear lakes covered much of this land.  Deer, moose, bears, and many other animals lived in the woods.

The Indians of the eastern woodlands were able to get the things they needed from the land.  They hunted in the forests and fished in the lakes and streams.  They raised crops and gathered food.  They used trees to build their houses.

The Indians built villages in clearings in the woods.  Many families lived in each village.  Everyone in the village belonged to the same tribe.  A tribe was often made up of people from many villages.  Each tribe had its own language and customs.

The Indians in the villages had to find, grow, or catch everything they ate.  Women raised crops and cooked the meals.  Men hunted animals and fished.  Boys learned from their fathers, how to hunt and to fish, and girls learned from their mother how to raise cops and to cook meals.

Animals, such as the geese taking off from a field meant more than food to the Indians.  They used almost every part of the animals they caught.  They made the skins of animals, such as deer and bear, into clothing and blankets.  They used feathers to make clothing and decorations.  They shaped bones into tools.  From deer came not only food and clothing, but also string, rattles, glue, and arrowheads.

Many kinds of trees grew in the woodlands, and the Indians used them in different ways.  They made shelters, canoes, and baskets from the bark of birch trees.  The Indians peeled the white bark from the tree in large sheets.  The thin sheets of birch bark were lightweight.

They used large sheets of birch bark to cover their houses, called wigwams or tepees. 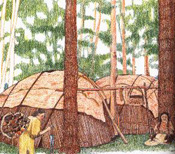 To build the wigwams, the Indians set long, slender tree branches into the ground in a large circle.  They then tied the tops of the branches together with strips of bark.  They laid birch bark over the branches.  Sometimes they used matting, made from plants  reeds, as a covering.  Both matting and birch bark cover the wigwam.

The Indians also used birch bark to make canoes.  First, they formed the bark into the shape of a canoe.  Next, they built a wooden frame for the inside of the canoe.  Then they used split tree roots to sew the frame to the bark.  Finally, they covered the seams in the birch bark with pitch, a dark sticky material from certain types of evergreen trees.

In places where birch trees did not grow, the Indians made canoes from pines, oaks, and other kinds of trees.