These Indians were known as the Pueblo Indians.

The Indians of the Southwest Culture lived in apartment-style buildings. These buildings were made of adobe, clay and vegetables dried in the sun. This type of home was especially good for areas that had very little rainfall and a hot desert climate. Many families lived in each apartment. As families grew, rooms were added on top of the rooms that were already there. 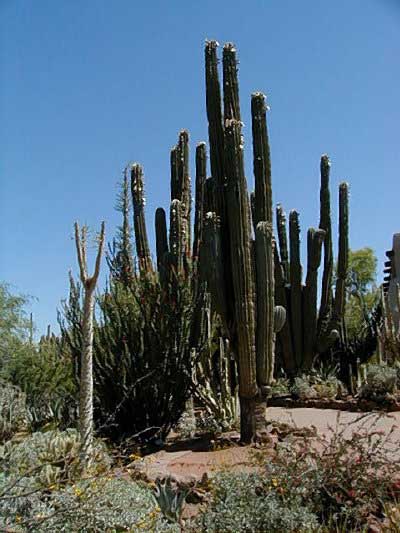 Many tribes of Indians lived in the western part of the United States.  Some lived along the Pacific Ocean from Alaska to northern California.  Fish and game were plentiful on this coast.  The Indians speared salmon and other fish in the rivers of the area.  They also knew how to hunt seals, sea otters, and even the mighty whale.  Thick forests near the ocean supplied them with deer, elk, and plenty of plants an berries, just like the Woodland Indians.

The women of the tribes wove lovely blankets and robes, while the men of the coastal tribes made beautiful copper shields and wooden masks.  The men also made great sea-going canoes from the huge cedar trees and redwood trees that grew along the coast.

The Indians used these canoes for the hunting of whales.  This could be very dangerous because of the size of the canoe compared with the whale.  When approaching a whale the hunters used harpoons with a rope tied to one end.  The other end was tied to the boat.  A wounded whale could pull the canoe out far into the ocean before it died.

The Indians of the northwest coast built lodges.  They were made of the big cedar trees.  Many families would live in these lodges.

Outside their lodges, the Indians put up totem poles.  They were very tall and had faces and animals carved on them.  Each totem pole told the story of a family or clan. 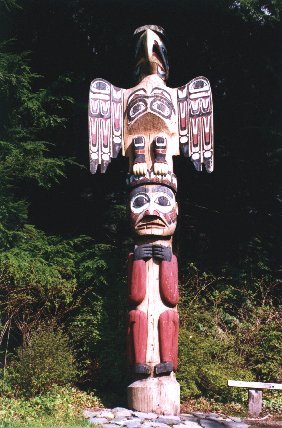 Thunderer's Pole: The original of this totem was at Tongass Island, and it symbolizes Thunder, belonging to the Thunder House people. Four brothers were changed into Thunderers. Like the Thunderbird, they create thunder and lightening and live high in the sky and on the mountain tops.

The Indians who lived further south in California lived in small villages.  They ate wild plants, seeds, and nuts.  They knew how to pound acorns into cornmeal to make bread or mush.  They hunted and fished in the rivers.

Some Indians lived in the high plain between the mountains near the ocean and the Rocky Mountains to the east.  This area was too dry to grow crops.  They had to eat other things like snakes, grasshoppers, and grubs to survive.

Both the California Indians and those of the high plain made beautiful woven baskets.  They used feathers and beads to decorate them.