We pledge allegiance to our flag everyday in our classroom.  But, boys and girls, do you actually know the history behind our flag and what the pledge truly means?

You are only 6-7 years old, most of you.  Some of this site might be over your heads.  But, when you get a little older, I would like you to learn more about this wonderful country of ours and... remember!

When the Revolutionary War was fought from 1775-1783, the colonist fought under more than one flag.  The first flag to represent all thirteen colonies was called the Continental Colors.  It was also known as the Grand Union Flag.  The British flag appeared in the top left corner of this flag.  It served from 1775-1777 and was the first American flag to be saluted by another country.

When the Declaration of Independence was signed on July 4, 1776, it seemed out of place to include the British flag. It was then that the Continental Congress decided the new American flag would be red, white, and blue; have 13 stripes; and have 13 white stars on a blue field to represent the 13 original colonies.

It isn't exactly clear who designed or made the first flag.  Another delegate to the Continental Congress named Francis Hopkinson claimed design for it.  A gentleman by the name of William J. Canby claimed his grandmother, Betsy Ross, made the first American flag.  A seamstress in Philadelphia, Betsy Ross had made other flags during the Revolutionary War.  She ran an upholstery business with her husband, John.

Canby claimed his grandmother had told him that General George Washington had asked her to make the flag.  He suggested a design with 13 stars and 13 stripes, each star having six points.  Betsy folded a piece of paper and made a five point star.  This was approved by General Washington.  The 13 stars were placed in a circle, on a blue background. Betsy then added the 13 alternating red and blue stripes.  This was approved on June 14, 1777.  Some historians found that the evidence in government records didn't prove what Canby claimed.  Although Betsy Ross may or may not have made the first American flag, it has been proven that she did make flags for the Pennsylvania state ships.

What do the colors on the flag mean?

The colors red, white, and blue did not have meanings for The Stars and Stripes when it was adopted in 1777. However, the colors in the Great Seal did have specific meanings. Charles Thompson, Secretary of the Continental Congress, reporting to Congress on the Seal, stated:

"The colors of the pales (the vertical stripes) are those used in the flag of the United States of America; White signifies purity and innocence, Red, hardiness and valor, and Blue, the color of the Chief (the broad band above the stripes) signifies vigilance, perseverance and justice." 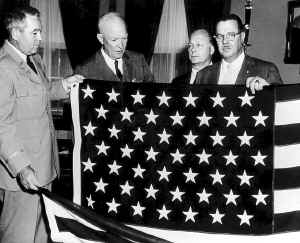 There is quite a lot of history behind our flag.  Over the years it has been known as Old Glory, the Star-Spangled Banner, and the Red, White, and Blue.  It says a lot about where and how the United States began, and where it is today.

Even more importantly, this flag represents freedom!  Freedom that we have and live each day.  Other people living in other countries are not so fortunate.  We should love and respect our flag, as well as our country.  Many people have died defending the rights that we possess as citizens of the United States of America!