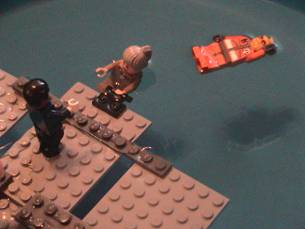 By: Jonathan A. Stokeld

Dedication: To Mom and Dad, Aaron and Jordan

“What a Lego Town I made!” said Andy, staring at his wonderful creation.  It was a sunny, beautiful, summer day perfect for building with Legos.  These weren’t like any Legos because Andy’s Lego mini-figures were, with Andy not knowing it, alive.

“Andy Smith!” called his mother.  You’re going to be late for school!”

“Leave your fun Legos alone and get ready for the bus,” said his mother, now coming in his room.

“Oh all right!” said Andy. “But make sure Rachel doesn’t mess with this Lego town I made.”  Now his mother was looking at the well built Lego Town.  It had a supermarket and a police station and a great number of houses.  It also had a great number of mini-figures.

“Ok, that’s a fine Lego Town and I will not let your sister Rachel mess with it,” said his mother.  “There’s the bus, here’s your lunch, Andy.  Good-bye.”

“Good-bye!” said Andy.  He snatched his lunch bag and took off.

“And by the way tomorrow’s your birthday!” called his mother after him. 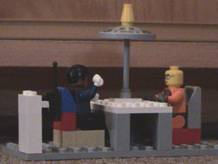 After Andy had gone to school, it was silent in his room.  Suddenly, one of the mini-figures at the police station moved.  Soon all of the little Lego figures were in to action.  They were at the market bargaining.  There were doors on houses opening with figures coming out of them.  There were mini-figures going to the Police station.  At one spot right beside the hospital that Andy had made were two mini-figures at a Lego table sitting and talking.

One was someone from the hospital, Dr. Sam, and the other was Ed, who worked in the Coast Guard.   “I heard that Andy, the one that built this wonderful place, has a birthday tomorrow,” said Ed.

“Yeah, I heard, too,” said Dr. Sam.  “’member how last time he built a Duplo Town and smashed it with his friends using water balloons?”

“Yeah!” exclaimed Ed, “and I heard that he promised next time he would build another town, this time out of Legos, and do that same thing with it.”  They both stared at each other, but did not say anything.

Then Dr. Sam went on.  “Do you think he still remembers his promise?”

“I don’t know,” replied Ed.  He thought for a minute and then continued, “I think he does, and if this is true, we must warn every single soul in this Lego town!”  Before the party the next day, the whole Lego town had been warned.   When the party began, Andy and his friends ate there lunch and cake.  After that, they started to make something.  No one in the whole town had any idea what it was.  So Ed sent a policeman named Henry and Dr. Sam to spy on all of the boys.  Since they were very small, they could not be seen easily.  So they hopped into a plant near the boys.

Andy had dropped his binoculars in the plant accidentally.  The minifigures used it to see what the boys were making.  They saw a bucket of water and in a flash they knew what it was.  They came back and went straight into Ed’s office.  “Did you find out what they were making?” asked Ed.

Then Henry said, “It is terrible.  They’re making water balloons!!”

Suddenly the Lego wall smashed open and the three mini-figures saw something round and green.  It ripped open and out came lots of water.

“The water balloon attack has begun!” shouted Dr. Sam.  And the three figures jumped out of the smashed wall, breaking through the water.  They landed flat on their faces.   The boys were tossing water balloons at the Lego town.  When Ed, Henry and Dr. Sam got up, they saw that six houses were smashed to pieces, half of the supermarket was also destroyed, but the police station wasn’t harmed yet.  Water balloons were soaring through the air and smashing houses.   This may have been fun to Andy and his friends, but it was not for the Lego town’s figures.  The room was now flooded, and it got deeper and deeper.  The boys found a long, strong box and put it in the room.  They closed the door, blocking the water from going out, and hopped in the box allowing them to sail through the deep water.  Dr. Sam found three Lego platforms and with other Lego pieces, the three mini-figures connected the three

platforms together.  Ed saw someone swimming in the water.   It was another Coast Guard worker.  The two of them saved mini-figures in the water and soon all the Lego townspeople were on the three enormous platforms.  The other coast guard worker, James said, “Do you think this could get any worse?”

Soon the boys were out of water balloons and they all opened the door.  It was very hard because the knob was under water.

The water rushed out of the room carrying the whole Lego Town with it.  “We can’t leave the Lego pile!” shouted James.  “Oh, no!”

Some mini-figures were jumping overboard into the shallow    water.  But Ed, Dr. Sam and Henry, another police man named Jacob, James, and a woman named May stayed on the platforms.  They were swept into the living room.  They had been collecting Legos on the surface of the water and they found a Lego motorcycle.  After all of the water was outdoors, the figures got two Lego ropes and hitched up the motorcycle to the platforms and they were ready to set off!

The motorcycle pulled the figures out of the living room.  Suddenly feet started rushing to them.  The boys were coming!  “We’ll have to go on foot if we don’t want the boys to know we’re alive!” yelled Ed.

“Yeah, let’s go,” said Dr. Sam.  They got off the platforms and Henry, who was driving the motorcycle, got off it.  They rushed under the television and hid.  When all of the boys had gone past, a beetle chased the figures out from under the T.V.  They had to walk on foot because the boys had taken the platforms.

Meanwhile, Andy was in his room.  He picked up a Lego spear that was really sharp.  He went in the living room and dropped it right in front of the figures.  They did not know that later they would need it for danger, but they took it along.  They moved out of the living room and did not know that they weren’t headed for Andy’s room.  They went to the doorway that led outside.  “Man, where are we?” asked Jacob.

The figures got into one of Andy’s friends shoe.  When the friend put it on, he carried the figures outdoors.  “We must get out of here!” shouted May.  They climbed out, rushing for the door.

Ed was so much in a hurry that he tripped on a rock.  Everybody turned and ran to help him.  When Ed got up he saw something black over him.  In a flash he knew what it was.  “Quick!” yelled Ed.  “Get me the spear!”

May came rushing to him with a spear in her hand.  Ed snatched it from her and rushed toward the black spider with the spear in his hand.  He tossed it but the spider jumped away.  He picked it up and looked up to see that the spider, thinking Ed was an insect, was crawling toward him.  Ed shouted and ran toward it.  He distracted it while his friends snuck behind it.  They tackled the spider just in time!  “Quick!” yelled Dr Sam.  “Quick Ed, stab it quick!”

Ed raised the spear and stabbed it on one of its legs, but one stab was not enough.  Ed quickly stabbed it again, this time right between the eyes.  The figures were into action.  Finally the battle was over and the spider lay dead.  The figures saw that all of Andy’s friends were gone and the door was closed.  “We must get in,” said Henry.  “Maybe through the window.”

“The window!” exclaimed Ed.  “That’s it.  You see, Andy hung a string there for no reason.”

“Do ya' think he knows we’re alive?” asked Dr Sam.

Before long, the figures were climbing the string that hung in the window.  “This is the window to Andy’s room,” said May.  “Our journey won’t last very much longer.”  They soon were in Andy’s bedroom.

Suddenly, they heard a buzzing noise.  “What’s that?” asked Henry, “I hear something.” 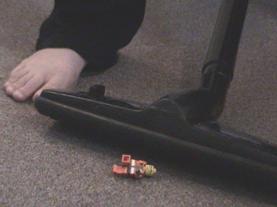 “Ohhhhh NO!” yelled Dr Sam.  “He’s gone!”  They were very, very sad, but the mini-figures were in Andy’s bedroom, and in his bedroom there was a LegoTM   pile, the home of the figures.  And they were very close.  “We just have to find the Lego pile!” said Dr Sam.  “And that will be easy.”

“You should go to the Lego pile with us,” said Henry.  “We’re almost there.”

They stayed in a bug cage that night.  The next morning they set off.  When they got near the bed, Henry yelled, “Quick, hide!”

“ It’s an enormous crab with a tail!” replied Henry.

They quickly hid under Andy’s bed.  When the fierce scorpion was out of sight, the figures got out from the bed.  Suddenly they saw the scorpion again!  But this time one big pair of feet was right beside it.

One foot raised and went down on the scorpion, smashing it to pieces.  Andy to the rescue!  Andy dropped Ed down beside the figures and went away.

“Where did you come from?!” asked May.

“It’s a long story,” said Ed.  Then they all noticed a piece of paper on the floor.

“Can anyone here read this?” asked James.

“Well,” said Ed.  “Andy found me in the vacuum cleaner.  And I just had to talk to him.  I told him what had happened to us and he’ll be here to take us back to the Lego Pile pretty soon.”

I’ll be right where you are now to take you back home.

Ed said, “Me and Andy are good friends now.”

“But what about the balloon attack?” asked Jacob.

Ed looked at him and said, “He will never do that again.”

When Andy came, he said, “Man, I’m sorry we attacked you with water balloons.”  He took them to the pile of Legos.

“I am very glad we finally got home,” said Dr. Sam.

“And I’m glad that Ed survived,” said May.

And they all shouted together…

By    Jonathan A. Stokeld

“’Remember how last time he built a Duplo Town and smashed it with his friends using water balloons?” said Dr. Sam.

Oh no, the water balloon attack has begun.  Andy and his friends are smashing a Lego Town, with water balloons.  Will Ed and his friends survive?  After they get swept out of Andy’s room, will they ever get back?  Well, you’ll see in this action packed book!  The Lego Story is a builder’s dream.