The owl is a sharp bird.  Why you ask?  It doesn't stick you!  But, it does have a sharp, curved beak.  It has sharp, hooked claws, called talons.  It also has super sharp senses.

The owl can hear much better than most animals.  Feathers hide big ears on the sides of its head.  These ears are so sharp they can pick up beetles rustling in the grass.

The owl has amazing site, too.  Unlike most types of birds, it looks out from eyes in the front of its head.  Seeing with both eyes at once helps the owl judge how large and how far away things are.  Even at night, the owl sees extremely well.

One thing the owl cannot do well is move its eyes.  When it wants to see from side to side, it must turn its whole head.  Its neck is built so well for turning that the owl can see even what is directly behind it.

There are more than 130 different kinds of owls around the world.  In North America, there are nearly twenty kinds, and they come in all sizes.  The three biggest are the great horned owl, the great gray owl, and the snowy owl.

If any of these owls stood on a piano with its wings spread, the wing tips would reach both ends of the piano. The wings of an elf owl spread only one-fifth that far.  The elf owl is the tiniest owl in North America.  It weighs less than a bar of soap! 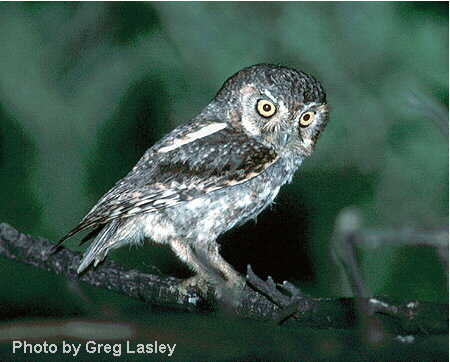