Many of us have loved a teddy bear. Maybe we've even had more than one very special "teddy" in our lives. Here is the real story of how the teddy bear sprang into our hearts.

Although the Steiff Company in Germany produced a jointed stuffed bear in 1902, the First Teddy Bear was made by Rose and Morris Michtom with the influence of Teddy Roosevelt and Clifford Berryman. Here's why:

Nearly 100 years ago, President Theodore Roosevelt, went on a bear hunt. He enjoyed nature and being out in the woods where animals lived. Because he was the President of the United States, the people organizing the hunt wanted to make sure the hunt was successful.

But after 3 days of walking and climbing and riding, no bears were found. Now what? The President's bear hunt would be a failure!

The next day the hunt guide and his hunting dogs finally found an old bear. The dogs and guide followed the bear for quite a distance until the bear was very, very tired. The dogs attacked and injured the old bear. The guides tied the bear to a tree and called for the President. Here was a bear for him to shoot! President Roosevelt looked at the poor old bear and said "no!" No one would shoot this old bear for sport. That would not be right. However, the bear was injured and suffering. President Roosevelt ordered that the bear be put down to end its pain. 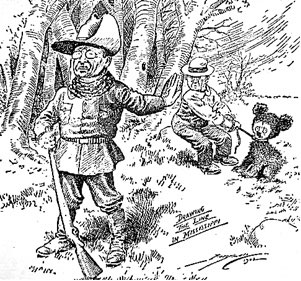 In the first cartoon that was printed about the President’s bear hunt, Theodore Roosevelt stood in the foreground. In the background, the guide stood with a bear tied on a leash. In that first cartoon, the guide and the bear were about the same size, suggesting a grown bear.

In the second cartoon which appeared later in other papers, the bear was redrawn to appear smaller than the guide. The bear was also redrawn to look like he was shaking with fear. This cute bear cub began to appear in other cartoons, which Clifford Berryman drew throughout Theodore Roosevelt’s career. So that is how a bear became connected to the name of the President Theodore Roosevelt.

But where do toy "teddy bears" come from?

After this famous cartoon appeared in the papers, a shopkeeper, Morris Michtom took two stuffed toy bears, which his wife had made and put them in his shop window. He had an idea.

Mr. Michtom asked for permission from President Theodore Roosevelt to call these toy bears "Teddy's bears". This store eventually became the Ideal Novelty and Toy Company. Other stuffed animals were made by a German company, Steiff. An illness left Margaret Steiff unable to walk. She refused to be stopped by her handicap and earned her living by sewing. First she made stuffed elephants, then other animals. In 1903 an American saw a stuffed bear she had made and ordered many of them. The phrase caught on. Now toy bears are often called teddy bears!

Made in the early days of teddy bear history, this 1904 Steiff hugs an early Steiff polar bear.

However, these stuffed bears would not be Teddy Bears. They may have been stuffed bears, jointed bears, German bears, Giengen bears, or even Leipzid Trade Fair bears, but they would not be known as Teddy Bears -- a name that is as synonymous with our nation's culture as baseball and apple pie.