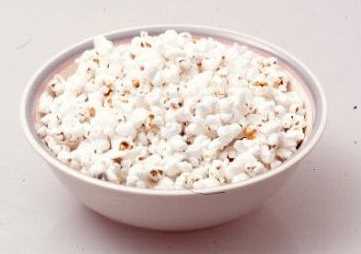 There are five types of corn and popcorn is the only one that pops. Kernels vary in color; including red, black, gold, off-white, and many others. Some are hulless and there are a variety of sizes, but only two basic shapes, mushroom and round. Taste varies by type. The yellow popcorn pops largest and is the most common. Try several different ones and see which you prefer. Popcorn is a wholesome food which aids digestion by providing necessary roughage. Health and medical groups regard popcorn as an excellent mealtime complement: it's sugar-free, fat-free, and low in calories. Popcorn is also a very economical grain so it's an inexpensive way to add fiber to your diet. It is a good source of carbohydrate energy and fiber. (source: National Popcorn Institute, US)

Low in both calories and fat, popcorn is literally "light" - one gallon of unbuttered popcorn weighs only 3 1/2 ounces - carrying a mere 390 calories. Why? Popped popcorn is mostly air and has no artificial colors, preservatives or sugars to weigh it down. But because it's high in carbohydrates, protein and other nutrients, popcorn is one of the healthiest snacks around.

And 1 gram of fiber per cup is similar to 1/2 cup of bran flakes or a large apple with skin.

Popcorn, like other cereal grains, has one important nutritional function: to furnish the body with heat and energy (calories). American organizations such as the National Cancer Institute (NCI), the federal government's cancer prevention agency, have recommended popcorn as a moderately high source of fiber that may help reduce the risk of some forms of cancer.