What could be cooler than Antarctica?

Antarctica is about as unique as your grandmother! You think you know what it's like down there (just as you think you know your grandmother really well), but do you really? How many of you know that Antarctica is actually a desert? Even though the continent holds 70% of the world's supply of fresh water it's as dry as the Sahara. So first of all, what is a desert? Well, if you look it up in the dictionary it may say something like: "A barren region, incapable of supporting populations or vegetation". Normally, people think of hot, dry regions like the Sahara when they think of deserts, but the polar regions are deserts also. Technically, an area is defined as a desert if it is dry, i.e. if the amount of evaporation in the area exceeds precipitation. Believe it or not, there actually is very little precipitation in Antarctica.

Don't look for penguins in the Arctic! The Earth is divided in
half by the equator. All 17 species of penguins live south of
the equator. Penguins don't need to live on ice. They need to
live near an ocean with cold water currents.

If you look at a globe and look at the bottom of fit you will find a huge island that's almost completely covered in snow and ice.  It's called Antarctica, and it is the coldest, windiest place on Earth.

The weather's bad enough there in summer, but in winter it's really terrible.

It's hard to imagine anything actually living there. But, yes  there is something that lives there and enjoys all of the harsh winters.  It is a penguin!

All of the Antarctic animals have adapted to life in extremely cold conditions. Some, like the whales, seals, and birds, have an insulating layer of fat to protect them from the cold. Others, like many fish and insects, have special chemicals in their blood (natural antifreeze proteins) that keep them from freezing. Many animals (like penguins and seals) have a compact body form and thick skin to help retain body heat. Birds also have waterproof plumage (feathers) and downy insulating feathers.

Scientists live in the Antarctic.  They brave the harsh winds that reach over 100 miles per hour. Antarctica and the surrounding area are natural laboratories for scientific research that can not be done anywhere else on Earth. Among the unusual aspects of the continent are its harsh climate and extreme cold, frigid ice-filled oceans, vast polar ice cap and large glaciers, geologic formations and structures that are related to more northerly land masses, uniquely adapted forms of plant and animal life, and unusual meteorological phenomena. These are covered by scientific disciplines that have attracted exploration and scientific curiosity for more than a hundred years. Here is the place for the meteorologist, oceanographer, atmospheric physicist, geologist, glaciologist, seismologist, geophysicist, biologist, and zoologist, and even the people of medicine who are examining the effects of the Antarctic environment on human physiology.

Some scientists tag animals and follow their breeding and eating habits. Animals are even weighed that are tagged.  It is very dangerous work that they do. In 2003 a Marine Biologist was killed by a leopard seal.  It was the first time ever that this happened. But scientists fear further seal attacks as the number of people working in the region continues to rise. You need to remember, we are invading their space, not the other way around. 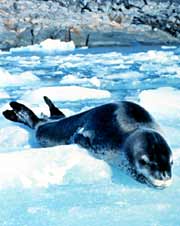 Leopard seals rank alongside killer whales as Antarctica's top predator. Named after their spotted coats and fearsome jaws, leopard seals have large, reptilian heads and streamlined bodies. They propel themselves using powerful fore-flippers, reaching speeds of 25 miles per hour (40 kilometers per hour). Females grow larger than males, weighing up to 990 pounds (450 kilograms) and measuring over 13 feet (4 meters) in length.

Some info from the Artic Connection