It is very cold while the father Emperor Penguins incubate their eggs. They stand in a tight huddle  for 2-3 months straight! The fathers don't eat anything, they just eat a little snow for moisture. They lose almost half of their body weight.  Once in a while, the fathers will reach down and turn their eggs over to make sure that they don't freeze. Because the father Emperor Penguins stand so close together, they conserve half of the body heat that they would lose if they didn't have others around.

When the chicks finally hatch they are hungry. Their father's then regurgitate a white secretion and feed it to the chicks.

Adelie penguins are the smallest of the penguins living on the Antarctica continent. They are about 28 inches tall and weigh about 8 to 9 lbs.  These penguins nest and breed on the rocky, ice-free beaches in large colonies of ten thousands of birds. There are over 2.5 million breeding pairs living in the Antarctica region.

These penguins are one of the stiff-tailed penguins with long tail feathers that drags the ground when they walk. They have a white belly with a black head and back. They have a white ring around the eye. Feathers cover most of the short beak. They are powerful swimmers and can jump straight out of the water onto the land. They often move on the land by sledding down hills on their bellies.

Adelies build their nests of pebbles on the rocky beaches of Antarctica. After mating, the female lays 2 eggs in the nest. The male then takes over the job of keeping the egg warm by holding it on the tops of his feet or laying on the egg in the nest. The female goes to feed and returns in three weeks to help with the chicks. When parents return with food for the chicks it will run from the chicks making the chicks chase and catch them for the food. Often only one chick will survive. Their chicks grow the fastest of all penguins.

Adelie penguins have to defend their nests from other penguins who try to steal pebbles, stones, and other nest building materials. They don't drink water but eat snow. They have a gland in their nose that takes the salt out of the ocean water that they swallow when catching fish and eating fish while in the water. 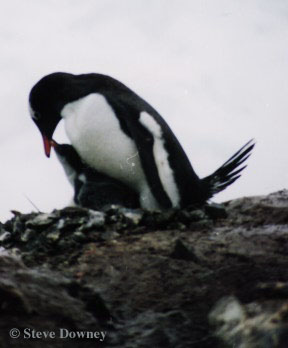 Gentoo, meaning "turban", refers to the whitish markings behind the eyes of this species. Gentoos range in size from 27 inches highand 12 pounds in the south to 30 inches high and 13.5 pounds in the north. The 60 degree parallel marks the general separation point between the Gentoos' north and south ranges.

Most of their colonies run along the Antarctic Peninsula. Unlike the Adélies and Chinstraps, Gentoos stay with their mates throughout the year. A mating pair may reuse a previous site, although they typically change from year to the next. Gentoos commonly locate their nesting sites inland. To ease their burden walking to and from the sea, Gentoos establish a common path for everyone. This continuous use wears down the path and makes it easier to use.

Gentoo chicks stay with the parents for about eight weeks. During their 9th and 10th weeks, chick return home at night to be fed. Should the mating pair lose their first clutch of eggs, a second set is laid if earlier enough in the season.

Macaronis earn their by the ornate yellow plumage above each eye. They were named after flashy dressers in the 18th century who were called "Macaroni Dandies"--just like in the song "Yankee Doodle".

Macaronis are similar in size and stature to the Adélies and Chinstrap penguins. On average, they stand 27.5 inches tall  and weigh 9 pounds. They typically frequent the island around Antarctica and don't venture onto the main continent. Their largest colonies are found in South Georgia and Heard Island.

Breeding season for Macaronis begins in December when mating pairs lay two eggs. The first typically is half the size of the second egg and rarely does the first egg produce a chick. The larger egg incubates for approximately 35 days. After the chick hatches, the female goes to sea and periodically returns with food for the family. After a couple of weeks, the chick is large enough for both parents to collect food at sea. By March, the chick generally is large enough to leave the colony. 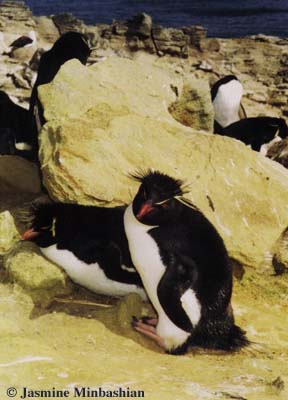 Rockhoppers are the smallest of the crested penguins in Antarctica. They measure only 21.5 inches high and weigh only 5.5 pounds . Similar to Macaronis, Rockhoppers have a feathered crest on top of their heads.

Although frequently found among Macaronis, this specie is much more aggressive. Their colonies are found among rocky slopes of islands out near the Antarctic Convergence. Two eggs are typically laid, one smaller and one larger.

They eat squid, krill and other small fish.