The New Year is the most important time of year in Japan. And in a country with hundreds of annual festivals, that's a big deal! Every year in the beginning of January, the whole country participates in many New Year's customs involving cleaning, decorating, eating, getting in touch with friends and family, and communing with the gods.

New Year's celebrations used to last much longer than three days but, in the modern way, they've been shortened to accommodate everyone's busy lives. 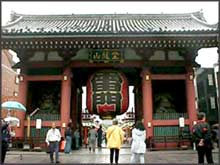 Each year, the Japanese begin preparing for the New Year by observing many ancient traditions. To attract the year's god to their homes, families place special decorations made with bamboo and pine branches at the entrances to their homes.

On New Year's Eve, families clean their homes. And for dinner everyone eats a bowl of noodles--in hopes that they will live as long as the noodles are! At night, many families gather around their televisions to watch the popular New Year's Eve program, "The Red & White Song Festival," where the year's top entertainers perform (think Dick Clark).

At midnight, Buddhist temples and Shinto shrines ring bells or gongs 108 times, signifying the 108 sins of man (it makes seven seem so meager). After the bells ring in the New Year, it is the custom for everyone to visit a shrine or a temple in their best clothes to pray for happiness in the coming year. Many people wait until the next three days to visit the shrines and temples. In Tokyo, the famous Meiji Shrine draws about three million people during the first three days of the New Year. That's over three times the New Year's Eve turnout in Times Square! On their way home, people buy good luck charms that are burned at the end of the year.

On New Year's Day, the Japanese postal system performs an amazing feat that completely shames the US Postal service. They deliver the country's New Year's Day cards on time--as many as 2.6 billion cards in one day! With the knowledge that they are in good postal hands, families sit down for saki and the New Year's meal (called Osechi) consisting of black beans, cod roe and dried sardines. These foods signify good work, prosperity, and good crops in the new year.

Other New Year's customs include giving money to children, calligraphy, and paying attention to the first dream of the year. It is considered luckiest to dream about Mt. Fuji, a hawk and eggplant--in that order. Who could have guessed that?

For visitors, the first three days of the New Year in Japan are probably going to be pretty quiet. But once everyone's back into the swing, there are a few annual early-January traditions you don't want to miss. January 4th is the opening of the first fair of the year, called Hatsu Hajime, located at the Kohganji Temple. Get out your money and get ready to shop! In many of these fairs, people get together and play ancient Edo games involving kicking balls, shooting arrows, and dancing.

On January 6th, it's time to get excited about Dezomeshiki! In this amazing spectacle, the Edo Fire Brigade performs acrobatic feats in the Meiji Shrine Outer Garden. These stunts date back to the Edo period, when the paper and wooden houses of Edo (ancient Tokyo) were always catching on fire. So you can imagine that the firemen were popular guys. They could use a ladder and a hand-operated fire engine like you wouldn't believe! These days, the firemen perform thrilling ladder acrobatics and show off the latest technology in fire-fighting.

But those Japanese folks just keep on celebrating. Later in January are doll parades and coming of age ceremonies. And Shinto temples hold huge bonfires of New Year's decorations from this year. So grab a bamboo branch and get ready for some fun.--JC