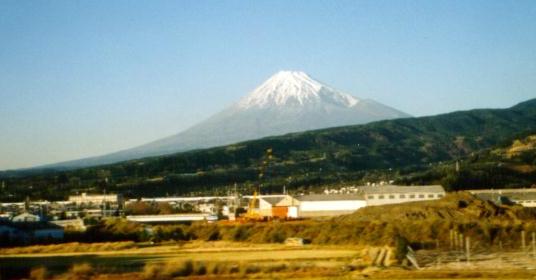 View of Fuji from the Bullet Train. The crater on the flank was created by the 1707 eruption.
Photograph courtesy of Mike Lyvers.

The volcano rises about 3,500 m above the surrounding plain. Fuji has erupted at least 16 times since 781 AD. Most of these eruptions were moderate to moderate-large in size. The most recent eruption was in 1707-1708 from a vent on the southeast side of the cone. The eruption ejected 0.8 cubic km of ash, blocks, and bombs. Five historic eruptions have caused damage, including the 1707-1708 eruption, but no fatalities. Fuji had two large eruptions.

Mt. Fuji or Fujiyama  is the highest mountain (3,776m or 12,285ft) in Japan and is world-famous for its superb conical form. This symbol of the beautiful land is located on the border of Shizuoka and Yamanashi Prefectures. Although it has been dormant, it is classified by geologists as an active. More than 200,000 people climb to the top of Mt. Fuji in a year. Thirty percent  of them are foreigners.

To the Japanese mind, Fujisan is much more than a single volcano. It is regarded as a sacred object, and the climbing of Mt. Fuji has long been a religious practice. It has exerted a great influence upon Japanese culture. Throughout the history of Japanese art and literature, this holy mountain has been the subject of uncountable poems and pictures. The yearning for greatness and beauty symbolized by Fujisan led the ancients to name many local mountains and towns after this beautiful mountain. Some sumo wrestlers and popular stars also have ring names or stage names associated with Fujisan. (Bates Hoffer, An English Dictionary of Japanese Culture) 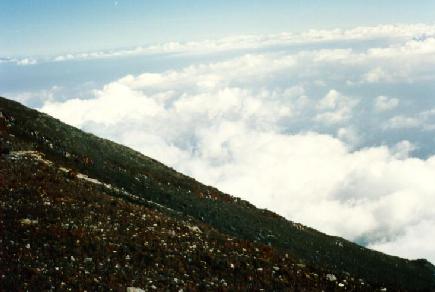 Mount Fuji is famous for its perfectly symmetrical cone. This photograph shows the shadow of Fuji projected of the adjacent countryside at sunrise. This photograph, taken in May of 1962, is copyrighted by Robert Decker.