Imagine a place on Earth that gets so hot that you could only go without water for four hours. Pretty scary, uh? You would walk hundreds of miles and see only sand.  This is the Sahara Desert, the largest desert in the world!

The Sahara is located on the continent of Africa.  It runs through 11 countries and a part of Africa known as Western Sahara.

The word "Sahara" means "desert" in the Arabic language.  The Sahara is one of the hottest places on earth.   September, 1922, the temperature in the Sahara soared to 136 degrees F.  At night the temperature can drop below freezing.

The Sahara Desert has many  different landforms.  Parts have sand dunes.  A sand dune is a mountain of sand.  Some dunes can be as high as 600 feet.  These dunes are found in huge areas of shifting sand called ergs.  Regs are another type of landform found in the desert.  regs are broad plains covered with sand and gravel.  Regs make up most of the Sahara.  Hammadas also make up a large part of the Sahara.  These are areas of flat, raised land that are also known as plateaus.  There are volcanic mountains in the Sahara in the country of Chad.  Emi Koussi, a peak in the Tibesti Mountains is 11, 204 feet high and the highest point in the desert.

The rain in the Sahara is less than 10 inches a year.  People cannot survive without water.  There are few lakes.  Most of these anyway are saltwater lakes.  People cannot drink from them.  Lake Chad is the only freshwater lake in the desert.  Rivers once ran through the Sahara.  We know this because dried up riverbeds, called wadis, still exist.  When it does rain in the desert, these wadis fill up with water and become active rivers for a short time.

Sandstorms are very common in the desert.  Brown clouds of sand cover the sky as wind blows sand everywhere.

Sometimes you can find gazelles and antelope in sand dunes of the Sahara.  Mostly though, you will finds, birds, snakes, lizards, gerbils, and small foxes in the dunes. 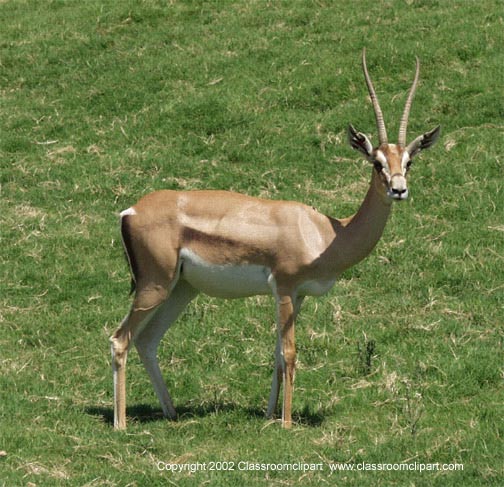 Many desert animals search for food at night, because it is cooler.