There are over 900 different kinds of bats in the world, most are found in the tropics.

The megabats are large and found in tropical rain forests (like Australia and Africa). These bats are also called flying foxes because they look like foxes or dogs. 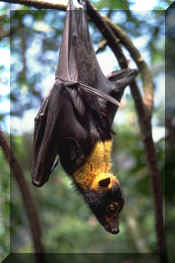 They either eat fruit or drink nectar from flowers, and sometimes look for food during the day instead of at night. They can see well. They have large eyes, simple ears, and simple noses. Stellaluna is a megabat.

The biggest bat in the world is the gigantic flying fox and it is found in Asia. It weighs over 2 pounds and has a wingspan of about 6 feet.

Take a look at some different types of megabats, which one do you like the most?